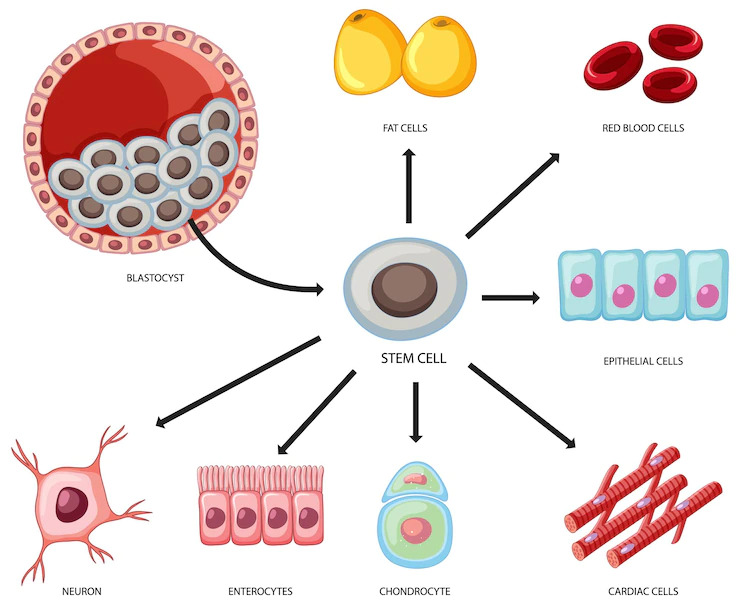 The application of stem cells in stroke works by repairing damaged brain cells and controlling the immune system to avoid additional harm to the body and brain after a stroke.

Stroke is a primary cause of chronic disability and death, accounting for 102 million disability-adjusted life years lost each year.

While the incidence of stroke is declining in the industrialized world, it has reached an all-time high in low and middle-income nations such as India.

There is a need to create therapeutic drugs that can be used beyond the first few hours after a stroke.

This necessitates a paradigm change from neuroprotection to neuro-restoration, addressing damaged or impaired brain tissue.

What Are Stem Cells?

This implies they may grow into cells that perform various activities in various body places.

The majority of cells in the body are differentiated.

These cells can exclusively fulfill a single function in a single organ.

Red blood cells, for example, are exceptionally engineered to transport oxygen throughout the body.

All people begin as a single cell.

A zygote, or fertilized egg, is the name given to this cell.

Eventually, the cells begin to differentiate and take on a specific role in a cerparticularrtion of the body.

This is known as differentiation.

Stem cells are cells that have yet to develop.

They have the power to split and replicate themselves indefinitely.

Other cells in the body can only multiply so many times before they begin to degrade.

When a stem cell divides, it may either stay a stem cell or develop into a differentiated cell like a muscmuscle or red blood cell.

Scientists think that stem cells may be used to cure and understand illnesses since they have the potential to transform into other kinds of cells.

Stem cells can develop into any cell.

It was once thought that intravenously administered cells would home in on the injured site and replace the dead neurons.

Some primary methods through which intravenous stem cells serve as "chaperones" include upregulation of growth hormones, avoiding cell death, and strengthening the synaptic connection between the host and graft.

Few studies have examined various periods, with outcomes varying depending on the analyzed model system and cell type.

Stem Cells As A Regenerative Medicine For Brain Stroke

The unique ability of stem cells has been used to develop a cell-based treatment for various neurological illnesses, including brain stroke.

Engraftment of neural stem cells has been shown to result in synaptic connection reconstruction and improvements in the electrophysiological characteristics of adult neurons.

Adipose-derived mesenchymal stem cells have also been shown to be helpful in neuro-regeneration.

Because they are non-immunogenic, simple to obtain, and non-interventional, induced pluripotent stem cells have an advantage over other stem cells.

Their genesis, however, remains an unsettled topic.

Stem Cells As A Combination Therapy For Brain Stroke

The use of recombinant plasminogen tissue activator (rtPA) intravenous injection was authorized over a decade ago.

According to one research, a nano-formulation of gelatin-coated polycaprolactone loaded with naringenin lowered pro-inflammatory cytokine levels.

Eugenol, extracted from Acorus gramineus, was studied in a rat model of cerebral ischemia perfusion.

In the rat model, pre-treatment with Eugenol reduced brain ischemia damage by activating autophagy through the AMPK/mTOR/P70S6K signaling pathway.

In another investigation, co-administration of glycyrrhizin and berberine demonstrated more potent inhibition of the HMGB1/TLR4/NF-kB pathway than either agent alone.

The study showed that administering these chemicals protects the brain against ischaemia-reperfusion damage.

How Are Stem Cells Used To Treat Brain Damage?

What Are The Applications Of Stem Cells?

Applications that might be made using stem cells include:

Can Stem Cells Fix A Stroke?

There are currently no stem cell treatments available for stroke.

Researchers all across the globe are utilizing several kinds of stem cells to explore how the brain functions and how to stroke damage may one day be restored.

How Are Stem Cells Used To Treat Stroke?

While stem cells are currently being utilized in clinical studies, there is evidence that treatment improves recovery when paired with clot-busting and mechanical thrombectomy.

Injected stem cells go to the location of a stroke in the brain to stimulate the healing process.

However, there is considerable debate over human embryos' creation, use, and disposal.

Scientists may be able to alleviate these fears by developing a novel way of transforming adult stem cells into pluripotent stem cells, which can differentiate into any cell type.

In research, this would remove the requirement for embryonic stem cells.

Such results demonstrate how far stem cell research has come.

Scientists still have a long way to go despite these advances before developing viable stem cell therapies.

Before establishing stem cell treatment in stroke, various clinical criteria must be addressed, including the kind of stem cells to be supplied, the number of stem cells to be delivered, the time of dosage, if dose-boosters are necessary, the method of delivery, and so on.

Exosomes produced from stem cells have the potential to be used in cell-free treatment. Several pre-clinical investigations are now underway to solve these concerns.